The ‘Team behind the Team’

Student Athletic Trainers necessary for athlete's health and well being 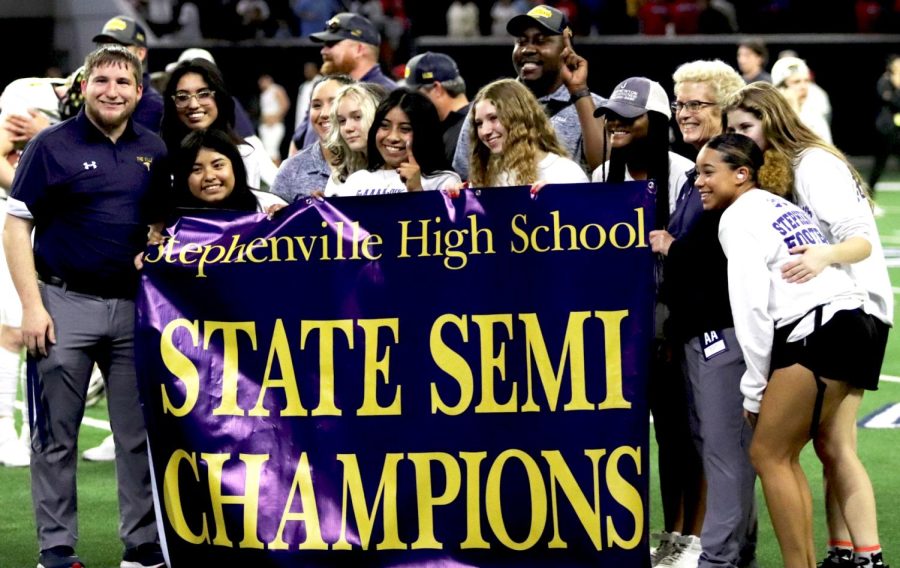 Student Athletic Trainers (At's) celebrate their State Semifinal Championship win against Hirschi on December 10, 2021 at The Ford Center. AT's were instrumental in tending to the player's injuries and keeping the players hydrated during the championship game.

The ATs (Athletic Trainers) run onto the field to give the athletes water and clean wounds until time runs out and it’s time to play ball.

The fall season teams would not be able to participate if it weren’t for the ‘quick action’ of the student athletic trainers. Student ATs are responsible for the prevention, care, treatment, and rehabilitation of all athletic injuries that athletes encounter. “Trainers” assist with or perform duties such as taping, administering treatments, providing first-aid, injury evaluation, and stretching. They are dedicated to both the well being of  student athletes as well as themselves. ATs  are the healthcare professionals responsible for the student athletes’ overall care. They work with athletes to prevent and treat injuries that occur during practices or games.

Athletic Training Coach, Wendy Svoboda, has been at SHS for three years now, and she is responsible for the 25 student trainers in the facility. Athletic Training or  Sports Medicine as it’s called,  is a very tough job that helps a person when he/she gets injured. Trainers are  needed in all sports. Coach Wendy (as she likes to be called) believes that her student trainers are a big part of  Sports Medicine.

“There’s no way we could do what we do without student athletic trainers because they do all the heavy work,” said Coach Wendy. “Setting up for practices and games, helping us take care of students and their treatments is necessary,”

While student ATs are looking for wounds and giving the players water on one side of the field, the ATs are dealing with injuries on the other.

“I’ve only treated the basic injury which is a bleeding wound,” student trainer Jazmin Ruiz said. “To clean a wound, first spray some hydrogen peroxide and then clean the blood off with gauze. Next, put some gauze on the wound as a Band-Aid and then wrap it with a Powerflex.”

Being an athletic trainer is a serious job. At the end of the day, he/she needs to make sure the trainers have everything that is necessary for the players health.

“It all varies depending on the sport it is,” Coach Wendy said. “Routine is always crazy because there’s always so much going on in one day, but the trainers are the ones who set up everything for practices and games.”

Almost all of her student ATs are involved in two or more extracurricular activities which sometimes interfere with games, but Coach Wendy is very understanding about this.

“Everything is important. I want the students to be involved in as many things at the high school as they can,” Coach Wendy said. “We try to shuffle them as much as they can, but we have people in band, newspaper, choir and different things that they have to miss. Even so, we have to make it work.”

Coach Wendy says she needs quite a few athletic trainers when there is a lot going on.

Addison Simpson is one of these. She  decided to become a student trainer after she suffered an accident while playing soccer.

“The type of injury was iliotibial band syndrome, an injury where the connected tissues that are located on the lateral part of the thigh and knee are overused,” Addison said.

The accident was devastating for Addison.

“After my injury, I still wanted to be part of sports even though it meant I wouldn’t play and training was a way to do that,” Addison said.

One reason Addison likes athletic training is because of the advantages she receives.

“I get to travel, see other schools, and I get to learn about how to deal with injuries,” Addison said.

She’s been a student trainer for football, boys’ basketball, and baseball but her overall favorite is baseball.

“Because of how far we went in baseball, I had the chance to get closer with the boys and create a bond with them,” Addison said.

Sports medicine is clearly visible in her future. She finds herself in class thinking about how her dream is becoming a reality already in high school .

“I plan on being an athletic trainer at Tarleton State University’s Athletic Training program,” Addison said.

Being a student AT has created so many memories and taught her so much.

“My favorite thing about athletic training has to be traveling and getting to see new places,” Addison said. “But it’s not just that.  I learn a lot of new things, and I do it with my friends.”

Coach Wendy has many memories with her student AT’s. There’s too many to pick a favorite.

“That’s tough,”  Coach Wendy said. “We’ve had a lot of good games and good playoff matches. It’s mostly when we have the excitement just like everyone else, like the day football received their sixth state championship title. Our trainers were jumping and some were even crying because of how happy they were.”

“Hardworking, that’s how I would describe us,” Jazmin Ruiz said. “All trainers put a lot of effort into what they do and you can tell they love what they do. They try each day to become better at what they do.”