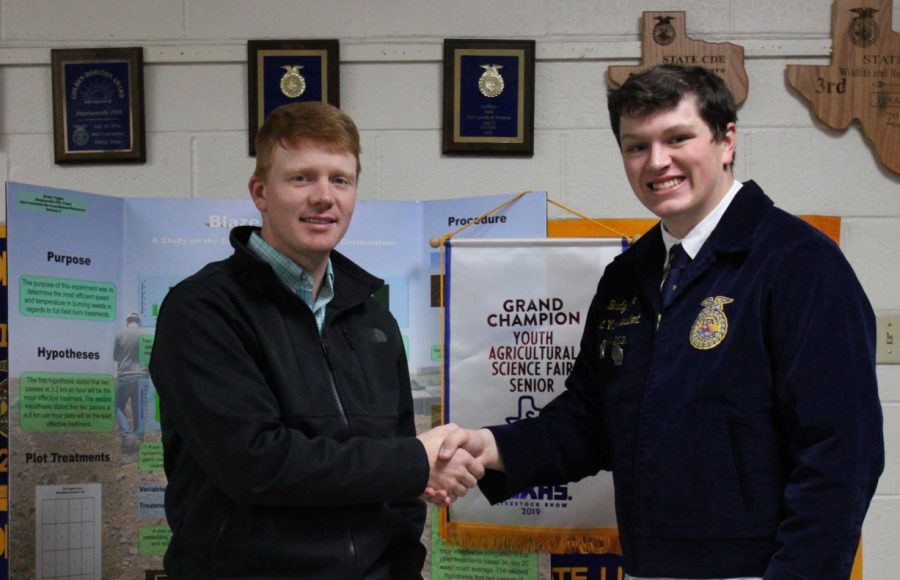 Self doubt flowed through him, much like the sweat dripping from his brow. He was standing tall in a line of his competitors at the Texas State Agri-Science Fair. He had presented his project on farmers using weed seed instead of pesticides to burn fields. With confidence in his presentation speech, he didn’t think that he would begin to doubt himself, but during the questionnaire portion of the contest, the judges asked him questions that didn’t allow the technologically advanced aspects of his project to shine. The calling of the winner had come, and he looked to those in his line up. Tuggle thought for sure someone else would win, and was surprised when his name was called out.  “I won my division scholarship which was a thousand, and then I won the Grand Champion Scholarship which is 4,000,” Tuggle said.

Tuggle built his project over a time period of less than a year and prepared heavily for competition.

“I did the research over the second semester of last year and over the summer.” Tuggle said. “I have been studying my speech a lot in my own time, rereading my project, and going over all the data; just to make sure I knew it. I was pretty prepared for it.”

“I was happy with my competition.” Tuggle said, “I was not happy with the questions the judges asked me, but I thought my presentation was very good.”

His confidence soon turned into self doubt, because of the questions asked by the judges during the questionnaire portion of the competition.

“I originally thought that the judges didn’t really comprehend how cutting edge it was, so I didn’t think it was going to get the score it should receive, but I guess it did.”

When Tuggle began to doubt himself, he looked at his competitors to try to infer who the winner was going to be, but then the unexpected happened.

“We were all on stage and we all had our division- cause all the division leaders go to the finals. I leaned over to Ryan Hess, because he won his division, and I said ‘I bet you a dollar that Emily girl wins’ and then they announced my name.”